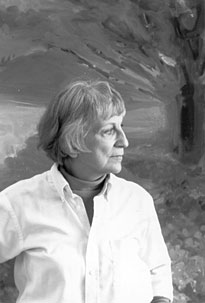 Painter and professor of art with over 50 one person shows: eight in NYC. Recipient of Connecticut Commission on the Arts, National Endowment for the Arts, and GE Fund teaching and administrative grants. Awards include: National Scholastic Scholarship; Ranney Scholarship; Cleveland Museum May Shows 1952, 1961, 1965; Purchase Award Indiana Artists; N.S.P.C.A. Kriendler Award at National Academy of Design; Connecticut Salute to Women; Djerassi Foundation three month residency, one of 50 artists to represent Connecticut at the Aldrich Museum of Contemporary Art, one of 19 artists invited to the Connecticut Biennial at the Bruce Museum, painting in the collection of the National Museum of Women, Washington, D.C. included in Four Hundred Years of Women Artists exhibit that toured Japanese museums for one year.

2002
Maine Speaks Out Exhibition, Portland Museum of Art, Portland, ME

1998 - 1997
Preserving the Past, Securing the Future, National Museum of Women in the Arts, Washington, D.C.

“Renaissance of a City,” by Larner, Library of Congress

Color, So Much the Essence of What Happens in Painting, by William Zimmer, New York Times, December 21,1997

Four Hundred Years of Women Artists, Catalog by the National Museum of Women in the Arts,” 1990.

A State of Artists, Catalog essay, by Ellen M. O’Donnell, Director of the Aldrich Museum of Contemporary Art, March, 1987.

All art by Alberta Cifolelli is ©Alberta Cifolelli/Licensed by VAGA, New York, NY. No part of this publication may be duplicated without the written permission of the Artist and The Housatonic Museum of Art except for brief quotations and reproduction for the purpose of reviews and promotional materials.