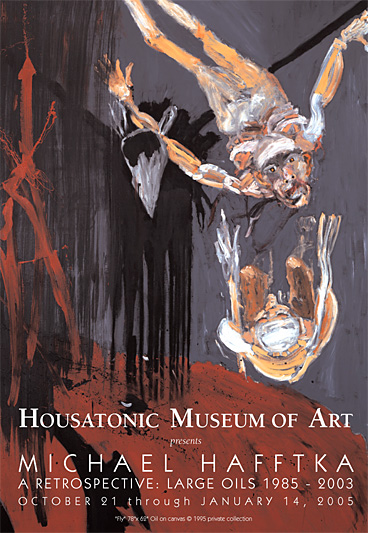 Lecture by the Artist December 9 at Noon

These events are free and the public is invited to attend.

Housatonic Museum of Art will present a retrospective of Michael Hafftka's work, containing 23 large oil paintings. A Retrospective: Large Oils 1985-2003 will be shown October 21 through January 14, 2005, accompanied by an 80 page catalogue with full color reproductions of all the paintings.

Hafftka's work is represented in the permanent collection of the Metropolitan Museum of Art, the Museum of Modern Art, the Brooklyn Museum, the Housatonic Museum of Art and many other museums.

Some have seen that work as depicting a deeply disturbing, chaotic world of existential suffering and despair mitigated only by the unflinching compassionate eye of the artist and the beholder. Others have viewed the work as a "revealing," amid that very suffering, as passages to the possibility of the experience of an ecstatic, transcendent vision. Among the more unsettling works shown are the four major triptychs "The Selecting Hand," "The Observer And The Observed," "Deposition" and "Dead End." In :Too Late," Hafftka's emotions are transmitted onto canvas, which captures both the anguish of a friend who committed suicide and the grim reality of life for the people left behind. Those paintings hinting at the possibility of ecstatic vision include "Christ Of Avignon," "Total Submission," "Survivors," and "Forty Years."

As revealed by this catalogue and show, a number of Hafftka's paintings make reference not only to a tortured world of suffering but also to the experience of harmony and beauty. Among such paintings are "Forty Years," "Bird," "Covenant of the Pieces" and the remarkable portraits, "Man Sitting" and "Igor and Romulus." All of his paintings, in fact, are notable for the exuberance and freedom of his manipulation of paint.

The work embodies subtle moral values born of human suffering or joy, yet is free of propaganda or political hypocrisy. Hafftka's work leaves the spectator with many possible interpretations, all demanding urgent response. Though his work embodies a highly personal vision, the emotions it arouses are universal.

As Housatonic Museum of Art director Robbin Zella put it, Michael Hafftka's work is both historical and prescient. His work has not fluctuated with the various trends of contemporary art or been influenced by images produced from the mass media. Rather, it reflects a steadfast commitment to painting as a medium through which to address fundamental human emotions and concerns.

The catalogue accompanying the show will include an introduction by Robbin Zella and critical essays by Michael Brodsky and Sam Hunter. Michael Brodsky is a well-known and highly respected novelist, the author of 12 published works of fiction and winner of the Hemmingway prize and the PEN/Faulkner Award for fiction. Sam Hunter is Professor Emeritus of Art History at Princeton and the author of numerous monographs, including works on Francis Bacon, Isamu Noguchi, and George Segal. Among his books published by Harry N Abrams are "American Art of the 20th Century," "Hans Hofmann," and "Robert Rauschenberg." Prior to his appointment to Princeton, Professor Hunter was the director of the Jewish Museum in NY, Minneapolis Institute of Art and the Rose Art Museum at Brandeis University.