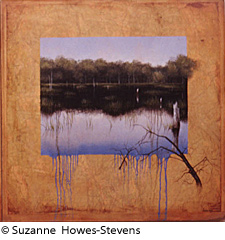 An Exhibition Of Their Exploration of Historic Site

Five artists who found inspiration in a National Historic landscape will be featured in an exhibition entitled, “Weir farm Visiting Artists 2003,” hosted by the the Housatonic Museum of Art from September 5 through December 12, 2003. An opening reception will be held on Sunday, September 14th from 1:00 until 3:00pm. This event is free and the public is cordially invited to attend. Participating artists include Barbara Allen, Sue Collier, Suzanne Howes-Stevens, Constance Kiermaier and Dorothy Powers.

Weir farm, originally purchased in 1882 by major pioneering figure in the American Impressionist movement J. Alden Weir is located in the towns of Wilton and Ridgefield. Weir spent nearly four decades there, often joined by many artists in his wide circle of friends including Childe Hassam, John Twachtman, Albert Pinkham Ryder and John Singer Sargent.

In 1990 Weir farm was designated a National Historic Site. It is Connecticut’s only National Park and the only one in the nation dedicated to American painting. The Weir Farm Trust, the Park’s nonprofit partner, provides opportunities for professional artists including the Visiting Artists Program now in its 13th year. Barbara Allen received her BA, Summa Cum Laude, from the University of Bridgeport and her MS in Art education from Southern Connecticut State University. She is an art specialist at Danbury High School and a senior faculty member of the Brookfield Craft Center. Group and solo exhibitions include The Canton Museum of Art; HarperCollins, New York; The Paris New York Kent Gallery, and The Society of Arts and Crafts, Boston among others. In addition, she has pioneered the visual literacy, cross-cultural exchange between students in Ghana and students from the Danbury High School to advocate Peace Education through the arts.

Dorothy Powers of Branford, CT is a professional artist and teacher. Solo and group exhibits have included the Yale University School of Medicine, The New Britain Museum of American Art, and Norwalk Community College. Her work is represented in corporate and private collections throughout the United States. In addition, she teaches drawing at the Creative Arts Workshop in New Haven. 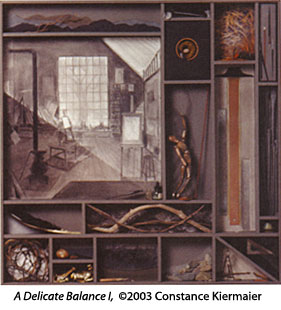 Constance Kiermaier of Westport is a graduate of the Yale School of Fine Arts. She is the recipient of numerous awards among them a fellowship in painting from the New England Foundation for the Arts, National Endowment for the Arts and a Faber Birren Award for Distinctive and Creative Expression in Color. Kiermaier’s work has been widely exhibited throughout the Northeast including the Portalnad Museum in Maine, the Woods Gerry Gallery at the Rhode Island School of Design, SOHO 20 in Chelsea and the Mills Gallery in Boston.

Suzanne Howes-Stevens of Storrs taught painting and drawing at Manchester Community College after completing her BFA at the Massachusetts College of Art in Boston and an MA from the Hartford Art School. After retiring in 1997, Howes-Stevens returned to her art making full-time. She is the recipient of the Connecticut Commission on the Arts and a Greater Hartford Arts Council Individual Artists Fellowship. (Ms. Howes-Stevens work appears at the top of this page)

Sue Collier has been living and working in New York City for the past twenty years, and has taught painting and drawing for ten years and has lectured at Queens College and Dartmouth College. She has exhibited nationally and has had numerous one-person shows. Ms. Collier had received various grants including several Meritorious Teaching Awards from SUNY Purchase for outstanding teaching. Ms collier attended the Skowhegan School and was a graduate fellow at Boston Umiversity. Her work has been reviewed by The New York Times, Art Forum, ARTNews, Artspeak and Women’s Artist News, among others.

Gallery hours are Monday thru Friday- 8:30am until 5:30pm; Thursday evenings until 7pm; Saturday, 9am until 3pm and Sundays Noon until 4pm.