September 8 through October 8, 2004 in the Burt Chernow Galleries 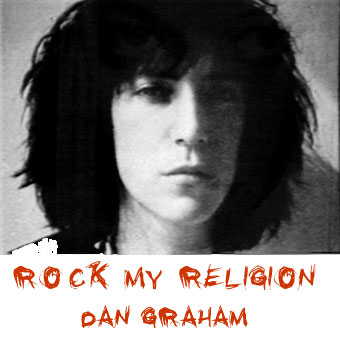 Rock My Religion is a provocative thesis on the relation between religion and rock music in contemporary culture. Graham formulates a history that begins with the Shakers, an early religious community who practiced self-denial and ecstatic trance dances. With the “reeling and rocking” of religious revivals as his point of departure, Graham analyzes the emergence of rock music as religion with the teenage consumer in the isolated suburban milieu of the 1950s, locating rock's sexual and ideological context in post-World War II America. The music and philosophies of Patti Smith, who made explicit the trope that rock is religion, are his focus. This complex collage of text, film footage and performance forms a compelling theoretical essay on the ideological codes and historical contexts that inform the cultural phenomenon of rock ‘n’ roll music.

Rock My Religion by Dan Graham will play continuously in the Gallery from September 8 - November 1, 2004.
An opening reception will be held on Thursday, September 9, 2004 from 5 to 7 pm.

Charles Peterson: Slide Show and Lecture, time to be announced

Poised at the epicenter of an explosive underground scene, photographer Charles Peterson witnessed the birth of a brash new era in music that grabbed the world by its throat and refused to let go. Grunge, the bastard child of ‘60s garage and ‘70s punk, revived the original gritty spirit of rock and roll: rebellion ain’t pretty but it sure is fun.

Peterson’s photography documents the raw power of live performances by the soon-to-be-famous artists and their dedicated fans. Yet, Peterson’s photographs do not rely on the cult of celebrity to tell this compelling tale of angst, anxiety, and acoustics. Rather, they capture the cathartic ritual between musician and fan played out in seedy clubs reeking of sweat and stale beer. Bored, alienated youth with nothing better to do than bash their instruments and mosh their bodies in a barrage of sound, song, and furious energy are mirrored with his signature style of wide-angle intimacy, swirling lights, and a strange sense of grace.

Peterson, who became known mostly for his signature style “blur,” exploited by use of the open shutter flash technique, capturing bands at the height of their intensity. Marvels of controlled chaos and swirling lights, his live photographs plucked spontaneous beauty from the tumult of a rock show, revealing the depth and honesty of its most unguarded moments.

Charles Peterson was born in 1964 in Longview, Washington. He received a B.F.A. in photography from the University of Washington in 1987. At that time he met up with a group of musicians (future members of Mudhoney, Soundgarden, Pearl Jam, etc.) and the journalist/record promoter Bruce Pavitt. He decided Charles’ gritty, populist look was the perfect element to showcase the bands on his new label, Sub Pop. The rest is contemporary pop history — grunge, Nirvana, Seattle.

Peterson’s photographs have graced hundreds of record covers, and appeared in publications worldwide including the Village Voice, NME, The New York Times, Newsweek, Mojo, People, Rolling Stone, Spin, Entertainment Weekly, Rockin’ On, Guitar World, and Newsweek. He has two previous monographs, Screaming Life: A Chronicle of the Seattle Music Scene (Harper Collins) and Pearl Jam: Place/Date (Rizzoli/Vitalogy, with Lance Mercer) His images have appeared in numerous other books, including The Blue Jean, 1001 Record Covers, Cobain, This Band Could Be Your Life, and Come As You Are, and feature prominently in the feature film “Hype,” as well as numerous other video documentaries. The exhibition was organized by The powerHouse Gallery and his book Touch Me I’m Sick was published in 2003 by powerHouse Books.

charles peterson:touch me i'm sick appears in the Gallery from September 8 - November 1, 2004.
An opening reception will be held on Thursday, September 9, 2004 from 5 to 7 pm.
A Slide Show and Lecture will be presented by Charles Peterson, time to be announced