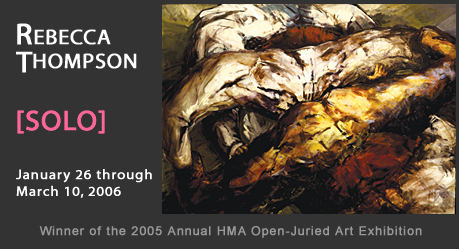 Compelling in both their strength and subtlety, the artworks of Rebecca Thompson are visually and metaphorically seductive.  Their humanity invites the viewer to unravel their secrets and to unleash their potent energy.  As portals into private reflection, the depth of the pieces’ dramatic yet meditative expression is heightened by the elegant richness of their aesthetics.

Thompson assimilates a broad range of experiences and inspirations, synthesizing the spectrum of influences into a cohesive essence.  Raised on a horse farm in Kansas City, Missouri, she draws on her background to shape her philosophy and to guide her artistic exploration.  Recollections of her upbringing often appear as powerful images that serve as leitmotifs for her subject matter and as springboards for insight and contemplation.

Puncture represents the genesis of Thompson’s body of work that is rich with personal symbols.  Bull horns appear to jut through the surface of the painting with dynamic force.  References to bulls, an iconic presence in rural areas, conjure up archetypal symbolic meanings.  Personifying strength, fortitude, and fertility, the bull dominates the farm just as it permeates mythology and ancient traditions.  Gestural brushstrokes infuse Bullock with drama; a bull’s horn cuts a swath across the picture plane and culminates in a vortex formed by a man unveiling himself from a mask.  Thompson pushes figuration to its limits to expressive effect.

In Two Head Perspective the artist explores the formal qualities of the composition, using the bull and man imagery as a source for her ongoing narrative.  The restrained tonalities of color and the interplay between negative and positive space make the image subservient to the impact of the powerfully structured yet seemingly spontaneous brushstrokes.  The bold calligraphic lines revisited in her ink and charcoal drawings reflect Eastern traditions familiar to the artist through her numerous trips to China; her practice of making marks and allowing them to intuitively develop are here freed to complete abstraction.  Liberated from color and form, their urgency explodes beyond the confines of the picture plane.

The physicality of the torso figures in Thompson’s series of pastel drawings contains the same innate tension on the verge of being released.  The richness of the surfaces and the fluidity of the lines suggest a story unfolding, a memory resurfacing. 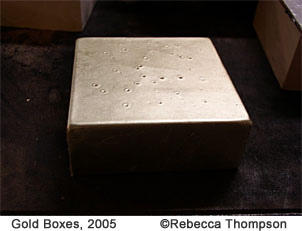 The delicacy of the Cutis paintings belies their vital spirit.  Their skinlike surface as implied by the title is achieved through the application of layers of paint on aluminum, producing an interplay of transparency and depth.  Their rhythmic blending of light and color dissolve into an intimation of renewal and regeneration.

Gilded boxes create a jewellike collage and provide a serene counterpoint to the intensity of the other works.  Varied surfaces—pristine, pinholed, punctured, crackled—emerge naturally during the process of layering the gold leaf, evoking an illusion of three-dimensionality that is reiterated by the depth of the wooden supports.  The preciousness of the gold recalls the gilded pages and Renaissance paintings of the family Bible of her childhood.

The combined complexity of Rebecca Thompson’s subject matter and her mastery of her media earned her this exhibition as first prize in the 2005 Housatonic Museum of Art Annual Open Juried Art Show.  Juror Judy Kim, Curator of Exhibitions of the American Federation of Arts, was drawn to Thompson’s work as it “possesses a monumentality that comes from her keen sense of composition and efficiency in line.”  Her pieces linger in one’s mind, sparking our imagination while expanding the boundaries of emotional participation. 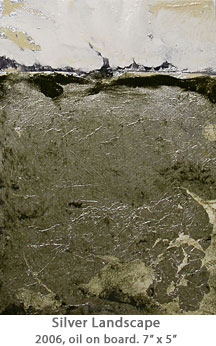 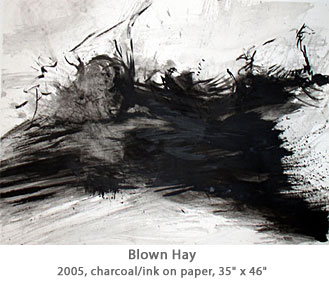 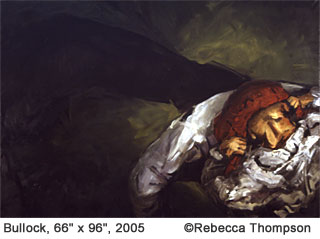