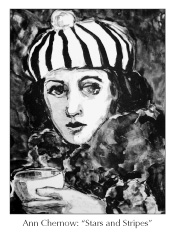 The opening reception for this exhibit is Thursday, February 19th from 12-3pm in the Burt Chernow Galleries. We apologize for any inconvenience that this may cause.

“Ann Chernow- Picasso Project,” an exhibit of prints by Westport artist Ann Chernow that focuses on the printing techniques of Pablo Picasso, will be on display at the Housatonic Museum of Art Thursday, February 12 through Sunday, March 22, 2009.

The exhibit represents the creative collaboration of artist Ann Chernow and Master Printer James Reed. Together they explored the techniques used by Picasso, discovering new ways to replace toxic media used in Picasso's printers' workshop during Picasso's time and incorporating them into Chernow's original works of art.

“Chernow and Reed have extended Picasso’s original methods,” said author Herbert Lust. “Going beyond Picasso’s images as a point of departure, they now have a compatibility with the drama of his printmaking. Not having detailed information about the methods and materials used by Picasso and his printers, and given today’s constraints due to the banning of many formerly used toxic printmaking materials, Chernow and Reed have created an astonishingly varied body of work which is both a homage to Picasso and an original and provocative oeuvre.”

In printmaking, the artist works on a surface of stone, metal, linoleum, wood, paper or other substance. The finished work of art reflects both the artist’s creation and the master printer’s skills in printing the work.

“It is important to understand that copying Picasso was not the intent of this project,” Chernow says. “All images are experiments that were attempts to render the appearance of certain surfaces and attain the drama of certain Picasso prints.”

The project began in 2002, when Chernow and Reed were admiring an original Picasso lithograph entitled “White Bust on Black.” “This dramatic black and white lithograph had an extraordinary visual energy,” Chernow says. “I wanted to produce a similar print using my own subject matter. It looked deceptively easy to do.” Reed, however, told her it was much more complicated than it looked. The pair then began to experiment to determine how Picasso arrived at the print. Their first attempts did not result in the ‘look’ of the Picasso work. They then turned to the book Picasso Lithographs by Fernand Mourlot, which noted some information about the technique used for each image. Chernow and Reed decided to delve further, producing prints using Chernow's images that emulate the ‘surface appearance of a varied group of lithographs and linoleum cuts.

Some of Mourlot’s information was so basic that it did not help them in how to proceed with a chosen image. Reed discovered through trial and error how to achieve the emulation of Picasso’s surfaces. The end result of their research and experiments is the series from which the images on display at Housatonic have been drawn. Accompanying each of Chernow’s works will be a copy of the Picasso work to which it relates, an explanation of why Chernow chose that particular image, and comments about the printing methods Reed used in making the print.

The exhibit will be on display from Thursday, February 12 through Sunday, March 22, 2009, at the Burt Chernow Galleries, named for Chernow's late husband who was founder of the Housatonic Museum of Art.

Chernow will discuss the project on Feb. 19 at 1:30 p.m. in the Galleries, located in HCC’s Lafayette Hall, The event is free and open to the public. For more information, visit http://www.HousatonicMuseum.org or call 203-332-5052.