The Housatonic Museum of Art in Bridgeport, CT opens PostSecret, the community art project that grew into an international phenomenon with an award-winning blog and four New York Times bestsellers.

Frank Warren, creator of PostSecret, will speak at the Beacon Hall Events Center at Housatonic Community College on 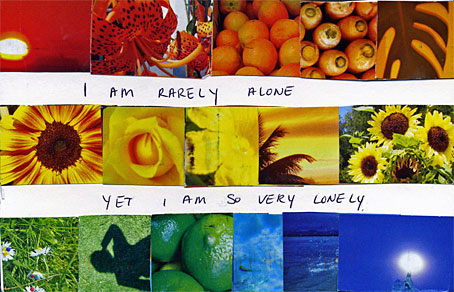 PostSecret, an exhibit of people’s innermost secrets by Frank Warren, will be on display at the Housatonic Museum of Art  Aug. 3- Sept. 13.

The exhibit, which has traveled the country since opening in Washington, D.C. in 2004, consists of anonymous postcards, many of them handmade, on which people have written their innermost secrets. Warren has culled some 400 postcards from the more than 250,000 he’s received for the exhibit.

The cards, carefully and creatively constructed by hand, are made from cardboard, old photographs, wedding invitations and other personal items artfully decorated. They have been sent to Warren from all over the world.

“The exhibit brilliantly reveals that human emotion can be unique and universal at the same time,” she added. “The secrets in the cards are provocative and profound, and the cards themselves are works of art.”

Warren is a small business owner who started PostSecret.com as a community art project. The website won two Webby Awards in 2006 and this year was named Weblog of the Year.

Warren, an Arizona native now living in Maryland, began the project in 2003, handing out 3,000 postcards to strangers, asking them to write down their secrets anonymously, and return the cards to him. He requested that the secrets be true and things that hadn’t been shared with anyone else.

After the first exhibit, word of the project spread and these “artful secrets” began arriving from every continent. They continue to arrive at the rate of 1,000 per week.

Warren, who is author of four successful PostSecret books, has appeared on the Today Show, Good Morning America, 20/20, CNN, MSNBC, CBC, NPR and Fox News says, “I have been asked many times why I started this. It still feels to me as though this project found me. All I try to do is make the right decisions every day to protect the integrity of the project – and learn to trust the journey.”

Proceeds from the PostSecret project have been used to help suicide prevention. When the All American Rejects  offered Warren  $1,000 to use some PostSecret images in their “Dirty Little Secret” music video, Warren asked them to donate $2,000 to 1(800)SUICIDE where he is a volunteer. The PostSecret project now has raised over $750,000 for the program and has received a special award from the National Mental Health Association for raising awareness and funds for suicide prevention.

August 3 through August 28: Gallery hours are Monday through Friday from 8:30am until 5:30 pm and Thursday until 7 pm

AFTER August 29th: Gallery hours are Monday through Friday from 8:30am until 5:30 pm and Thursday until 7 pm; Saturday 9am until 3pm and Sunday Noon until 4pm.

International Arts & Artists in Washington, DC, is a non-profit arts service organization dedicated to increasing cross-cultural understanding and exposure to the arts internationally, through exhibitions, programs and services to artists, arts institutions and the public. Visit www.artsandartists.org