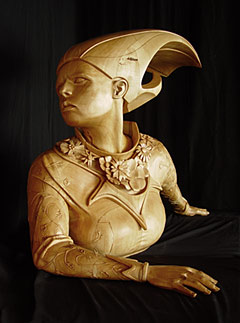 The Housatonic Museum of Art presents Sculpture in the 21st Century featuring work by members of the New York Sculptors Guild. The exhibit will open Thursday, February 23 and continue through March 23, 2012. A reception for the artists will be held Sunday, February 26 from 1 to 3pm in the Burt Chernow Galleries. This event is free and the public is cordially invited to attend.

The Sculptors Guild, founded in 1937, was an important moment for Modern sculpture in America and Guild members have ranked among the most prestigious and significant artists of the past seven decades. David Smith, an influential mid-20th century sculptor and a forerunner of welded steel constructions of expressive geometric abstractions, exhibited regularly with Sculptors Guild along with such renowned figures as Jacques Lipchitz, Louise Bourgeois, Seymour Lipton, lbram Lassaw and Herbert Ferber. In addition, Expressionist figurative sculpture also flourished, most notably exemplified by the work of Paul Manship, Chaim Gross, William Zorach, Jacques Lipchitz, and Jose de Creeft. 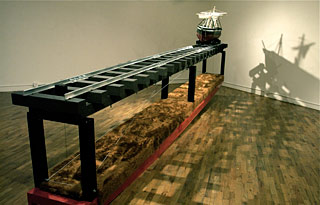 Ruin of Belief   by Steven Dono

In 2010, the Housatonic Museum of Art invited Nick Capasso, Senior Curator at the deCordova Sculpture Park and Museum in Lincoln, Massachusetts to select works created by the members for this exhibition. Capasso chose twenty-eight sculptures by fourteen artists, using several criteria.

“First and foremost,” Capasso said, “is my interest in work that is well wrought, and displays a confident, unselfconscious, or experimental attitude toward material, form, subject, and content. I was most attracted to works that look forward to the aesthetic and philosophical concerns of the 21st century, rather than back towards the 20th century.” Capasso selected a diverse body of work that explores architecture, history, art history, science, biology and the complexities of nature, and spirituality.