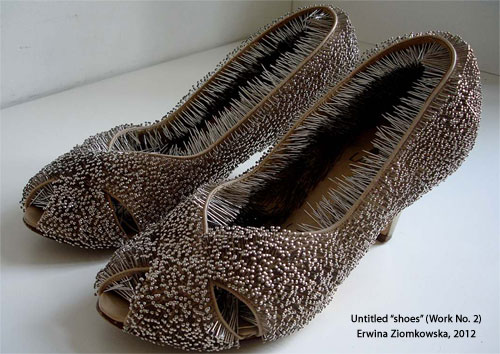 This excerpt from the French story “The Grandmother’s Tale,” recorded by Charles Perrault and retitled “Little Red Riding Hood” by the Brothers Grimm, is thought be a coming of age story for young girls passing from childhood into adulthood. Indeed, rural maidens would often toss pins into fountains wishing for a sweetheart and boys, in turn, would “pin” their beloved.

Pins and needles are the humble tools long associated with sewing and spinning which has been, and continues to be, an essential part of women’s domestic and industrial labor. Curator Suzan Shutan has brought together ten women artists who employ these common fasteners as a means of creative expression. Pins and Needles explores a variety of subjects including memory, mapping, beauty, nature, pleasure, loss, pain, absence and presence, poetry, scripture and spirituality.