Join Housatonic Museum of Art for the opening reception of David Hayes: Modern Master of American Abstraction in celebration of this important Connecticut sculptor whose career spanned six decades. David Hayes continued to paint, sculpt and exhibit until his death on April 9, 2013. The drawings and maquettes on view here are studies for his monumental sculptures and include the biomorphic and geometric forms that comprise his signature style. This event is free and open to the public and will take place in the Burt Chernow Galleries at the HMA on Thursday, December 11 from 5:30 – 7:00pm. The exhibition will run December 3, 2014 through February 8, 2015 whne the college is open. Click here for Gallery Hours.

A Hardcover Catalog is Available for $10.00

Born in Hartford, he maintained a home and studio in Coventry, CT where dozens of his sculptures are situated throughout fifty-plus acres of bucolic farm and woodlands. The influence of his mentor David Smith and his friend Alexander Calder are visible in the playful welded steel polychrome works on display in the gallery. Hayes drew his inspiration from nature, translating delicate foliage into lyrical, brightly painted industrial strength sculptures. 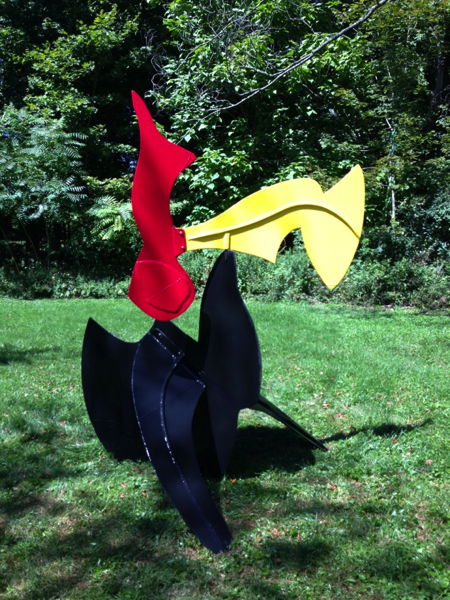 David Hayes (1931-2013) earned his MFA from Indiana University where, as noted above, he studied with internationally renowned Abstract Expressionist sculptor David Smith. He was the recipient of a Fulbright Award and a Guggenheim Fellowship. His works are included in the collections of the Museum of Modern Art, the Guggenheim, the Brooklyn Museum, Everson Museum, Carnegie Institute and Fitchburg Museum, Detroit Institute of the Arts, and the Wadsworth Atheneum as well as numerous corporate and private collections.

A Hardcover Catalog is Available for $10.00