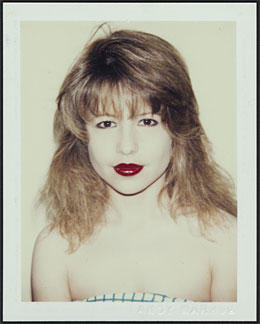 The HMA is one of only 183 colleges and universities across the country to receive original Andy Warhol photographs valued in excess of $28 million dollars in honor of the Foundation’s 20th anniversary.

Warhol Foundation President Joel Wachs said the Warhol Foundation’s Photographic Legacy Program is designed to give the public greater access to Warhol’s artwork and artistic processes by allowing people from the region to view and study this important and relatively unknown body of Warhol’s work.

“We’re delighted that we were selected to receive these photographs,” said Museum Director Robbin Zella. “They will be a valuable addition to our permanent collection which includes such notable Warhol works as Campbell’s Soup and Elizabeth Taylor.”

“The goal of this program dovetail’s perfectly with the vision of Housatonic Museum of Art Founder Burt Chernow, who felt that art belonged on public view, rather than secreted away in someone’s private collection,” she added

Housatonic is the only Connecticut college currently participating in the Photographic Legacy Program.

Jenny Moore, curator of the Photographic Legacy Program, said the photographs can reveal much about Warhol and his photography.

“A wealth of information about Warhol’s process and his interactions with his sitters is revealed in these images,” notes Moore. “Through his rigorous – though almost unconscious – consistency in shooting, the true idiosyncrasies of his subjects were revealed.”

“Often, he would shoot a person or event with both cameras, cropping one in Polaroid color as a ‘photograph’ and snapping the other in black and white as a ‘picture’,’’ she said. “By presenting both kinds of images side by side, the Photographic Legacy Program allows viewers to move back and forth between moments of Warhol’s ‘art,’ ‘work,’ and ‘life’ – inseparable parts of a fascinating whole.”

The Housatonic Museum of Art is located at Housatonic Community College at 900 Lafayette Blvd. in downtown Bridgeport, less than 150 yards off I-95 (Exit 27) and Rte. 8 (Exit 1), two blocks from the Arena at Harbor Yard.