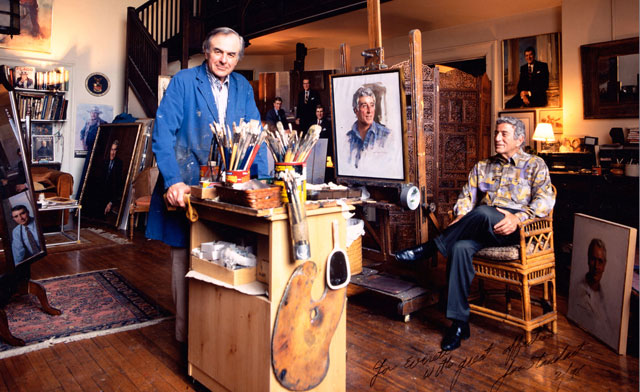 Bridgeport, CT...The Art Department of Housatonic Community College presents nationally renowned artist, Everett Raymond Kinstler to speak in Room 514 of Beacon Hall, 900 Lafayette Blvd, Bridgeport, CT on Monday, February 10, 2014, 5 – 7 pm, free and open to the public. Kinstler will talk about a career that began with comic book and magazine illustration and culminated in his becoming one of the nation’s foremost portrait painters. Visit www.housatonic.edu for further information or call (203) 332-5116.

Everett Raymond Kinstler started drawing comic books and illustrations for magazines and books at age 16. He was a member of the golden age of comic book artists that influenced Pop Art. Kinstler has painted more than 1500 portraits from life that include movie stars such as Tony Bennett, Katherine Hepburn, Paul Newman, and John Wayne. US Senators, over 60 U.S. cabinet members, and seven U.S. Presidents have posed for him. Kinstler’s portraits of President Ford and Reagan are the official White House portraits. The National Portrait Gallery and Smithsonian own more than 100 of his works, and have awarded him their highest honor, the Copley Medal. Kintsler’s retrospective exhibitions include the Museum of the City of New York, The Norman Rockwell Museum, Butler Museum of American Art, and the Century Association, NYC. A 2005 documentary about his career was featured on PBS.