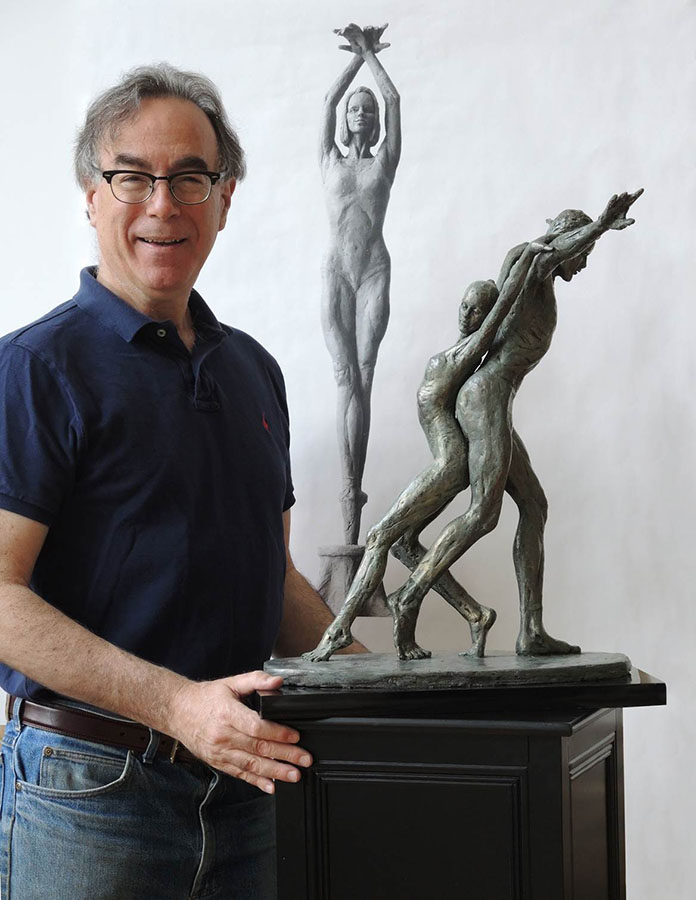 Marc Mellon is one of America’s premier figurative sculptors in bronze creating works that portray balance, gesture, and movement, a fully engaged aesthetic sensibility, and a rare ability to unveil the inner life of his subjects. He has earned most attention for his portraiture sculpting busts of leaders in the fields of politics, science, ethics, religion, literature, the arts, business, philanthropy and sports. “We are thrilled to have such a renowned artists share his experience with our students and the public,” said John Favret, Chairman of the HCC Visual Art Department where students study Fine Arts, Graphic Design, Web Design, and Illustration.  Favret continued, “Marc Mellon’s artist talk is the first lecture of the semester with several more fantastic artists scheduled to speak.”

Mellon was the sculptor of Barack Obama’s portrait for the historic 2009 Official Presidential Inaugural Medal.  In 2011 his bust of the Smithsonian Institution major donor Kenneth H. Behring was commissioned by, and unveiled at, the National Museum of American History in Washington DC.  Mellon was Master Sculptor in Residence at Brookgreen Gardens (2009) and at Chesterwood National Trust Historic Site (2012).  In October 2012, a bust from life sittings of Nobel Laureate Elie Wiesel was dedicated at the 92nd Street Y in Manhattan, and a second bronze was unveiled at Boston University in 2014.  Mellon has also created some of America’s best known sports sculptures.  The NBA MVP provided annually by Mellon for thirty years, has honored every NBA MVP since Larry Bird. Recent commissions include a bust of acclaimed author and journalist Tom Wolfe.

Mellon’s limited edition dance bronzes have been exhibited from New York to Tokyo, and uniquely capture the strength and beauty of modern dance and ballet.   His dance bronzes have served to recognize the achievements of dance world legends Agnes de Mille and Cynthia Gregory. A major exhibition of Mellon’s bronze dancers is scheduled for the Fairfield University Walsh Art Gallery from September 18, 2015 through January 15, 2016.

Mellon was raised in Brooklyn, NY and attended the University of Rochester to prepare for a career in medicine, but ultimately earned a B.F.A. from Brooklyn College where his studies included drawing with figurative artist Philip Pearlstein. He spent two years in a fulltime sculpture program at the Brooklyn Museum School and several more years of private study with Seijo Saito, anatomy classes at the Arts Students League with Robert Beverly Hale, and workshops with Gaetano Cecere at the National Academy of Design and Bruno Lucchesi at the New School in New York. His extensive training in classical traditions and processes enabled Mellon to work in clay, plaster, wax and bronze and to a successful career in portraiture and full figures. “This,” Mellon concedes, “has been, and continues to be, a humbling and fascinating journey.”

Mellon and Bloch and serve in leadership positions of The Artists’ Fellowship Inc., a charitable foundation assisting professional working artists in times of emergency, and are longtime active members and volunteers at the National Arts Club.

For further information contact Pete Rembetsy, or or call (203) 332-5116. The Housatonic Museum of Art Burt Chernow Galleries are free and open to the public when the college is open.  Visit the website www.HousatonicMuseum.org for gallery hours.  For additional information about the artist visit www.MellonStudio.com, or call 203 938-0138.